The A-Pian Grand piano is and old french Gaveau piano. Gaveau was a French piano manufacturer. The company was established in 1847 in Paris and used to be one of the three largest piano makers in France (after Érard and Pleyel).

This particular piano was build in 1960 and is reffered to as a "crapaud" ("Petite Grand" in english), which means that it's a little smaller than a "quart de queue" (baby grand).

It has a very particular sound, very bright and full of inharmonicity in the bass due to the short lenght of the strings.

This library was our first attempt at finding new ways of sampling a piano. We tried to reduce the size and still keeping the most important parts. 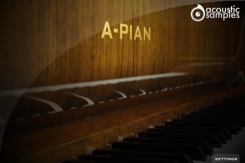 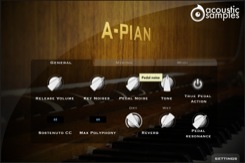 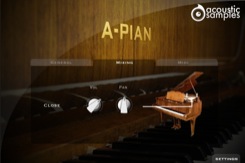 - The release Volume: the sound produced when you release a key if a note was going on.
- The Key Noises: the sound produced when you release a key and no corresponding sustain was played.
- The Pedal Noise: the sound produced when you press or release the pedal, it adds a lot to the realism.
- The Tone: a simple way to make the piano sound brighter or darker.
- The True pedal action, it is a feature that allows you to play a chord without the pedal and then hear the resonance of the whole piano when you press the pedal (without releasing the keys).
- The sostenuto CC, also called the middle pedal. You can sustain selected notes, while other notes remain unaffected.
- The polyphony. If you lower the buffer or simply want to be light on CPU, then increase or lower this value.
- The Reverb. We use a convolution reverb and you can adjust the dry and wet parts separately.
- The Pedal Resonance. It is the amount of resonance during pedal down.

- 820Mb, 232 samples.
- 3 Velocity layers for the sustain.
- 3 Velocities for the release.
- Pedal down resonance and true pedal action.
- Key noises samples.
- Sustain pedal noises (up and down), triggered automatically.
- Advanced UVI scripting giving you access to a simple yet powerfull interface and advanced features.

The Following End User License Agreement is included with A-PIAN. This License is only valid for the individual who has purchased an unopened, new and lawfully made copy of A-PIAN from a dealer or distributor authorized by Big Fish Audio.