Big Fish Audio - Clavi D9 - One of the most "funky" keyboard instruments ever invented.
Skip to content

The Clavi D9 is based on the well known clavinet D6 by hohner.
It is probably one of the most "funky" instruments ever invented, despite the fact that it was originally intended for classical music as its sound is close to the hapsichord. It turns out that it was very well suited to replace or double a rhythmic guitar and was used in many Funk and Disco hits.

The clavinet has 5 octaves (60 keys) and works in a simple way, when you press a note, the string is pressed against a bridge just like a hammer-on on a guitar, the non muted part of the string vibrates and the pickups amplify the sound.

The D6 has very few controls, 4 eq switches and 2 pickup switches to choose which pickup has to be used plus a global volume.
We recorded both pickups and we modeled precisely the eqs, as a result you can use the whites switches exactly like on the real instrument.
We sampled every possible aspect of the instrument, normal notes, staccatos, releases, mutes, every pickup, sympathetic resonances and more to give you the most authentic Clavinet sound possible. 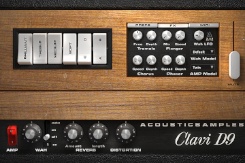 The Clavinet is often used to replace the guitars in Funk music, this is why most players mostly use very short notes. We thought of that when sampling the instrument and can reproduce it very accurately using a combination of staccato samples and longer releases.
You can also control the amount of release in the preferences panel to get more or less bite for short notes.

You can add more or less of that resonance to control how much body you want to add to your sound. 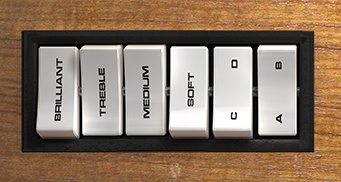 The Clavinet originally has two pickups, one next to the bridge that has a very bright sound and another one closer to the center of the string that has more bass. You can mix them using the switches just like on the real instrument. We even added a possibility that is not in the original instrument, you can control the volume of each pickup separately in the preferences to really reach every possible sound when mixing both pickups.


Here are the microphone switches positions:

A Clavinet is very often played with a Wah on it, this is why the Clavi D6 has an included Wah effect that you can control with any controller. It is by default set on the expression pedal, but you can change that by changing the CC value.
The Wah effects are not unique and usually depends on the brands, so we added a list of Wah models to choose from.

What if you don't have any continuous controller on your keyboard? Well, we thought of that and modeled an auto-wah feature. Unlike other auto-Wah that opens when detecting an attack, ours was designed after what really happens on a real one. Its frequency can be changed and also synched to the tempo if needed. 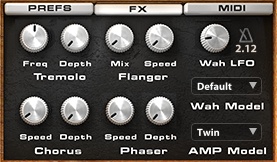 The four switches (which could be named 4 band EQ) named "Brilliant", "Treble", "Medium", and "Soft" have been carefully modeled to be as close as possible to the original ones.

Aside from the Wah, we also included the most common effects used with a clavinet.
First a Spring Reverb from which you can control the length and amount.
Then a distortion, a tremolo, a flanger, a chorus and a phaser, eachof these effects have two controls on the interface.
With all of these, you won't need any other plugin to play the Clavi D9 live.

We have been looking for the most widely used amps with Clavinets and we created advanced impulse responses of them. Here is a list of the Amps that you can choose from:

You can of course turn it off and use you preferred amp simulation software. 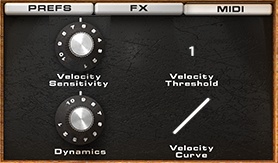 As always with our libraries, you have a complete control over the response of the library.
The Velocity Sensitivity changes the volume curve of the library.
The Velocity Threshold is simply the minimum velocity that you will have to play to hear a sound.
The Dynamics will set the minimum volume for velocity 1 and give you access to all the dynamics that you want.
The velocity curve remaps MIDI input and will give it a concave or convex shape thus changing some sort of a "MIDI sensitivity".
Clavi D9 now comes with its own sample player, the UVI Workstation 2 (requires v2.0.10 or later).
We provide it for free with every library that you buy, you don't need to buy an expensive sampler to use our products. It works on Mac and PC, in standalone or as a plugin (VST / AU / RTAS / MAS) and in 32 and 64 bits.

As it is based on the same engine (UVI engine XT), you can also use our products in MOTU MachFive 3 (requires v3.1.3 or later).

The Following End User License Agreement is included with Clavi D9. This License is only valid for the individual who has purchased an unopened, new and lawfully made copy of Clavi D9 from a dealer or distributor authorized by Big Fish Audio.

ALL RIGHTS NOT EXPRESSLY GRANTED ARE RESERVED. © 2013 Acousticsamples."