The E-Pian is a Classic 73 Keys Electric piano from 1972 recorded with the direct output plugged into a tube preamp. The tines were adjusted in a way that very few overtone was present giving this piano more warmness. This particular instrument was in a "normal" condition, which means that it was not properly restored, a few keys were not sounding right (and we sampled it before and after fixing those keys). This might be the rhodes you find on stage, five minutes before the beginning of your concert! 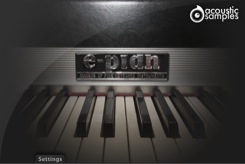 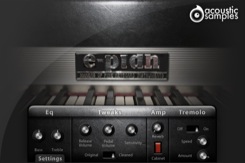 Settings
In this panel, you can change most of the aspects of the library to make it sound just like you want.
You can adjust:

- EQ, Bass and Treble: a parametric EQ with the two knobs available on the real EP.
- The release Volume: the sound produced when you release a key if a note was going on.
- The Pedal Noise: the sound produced when you press or release the pedal, it adds a lot to the realism.
- Original/Cleaned: the original electric piano had a few non perfect keys that we decided to sample anyway, we also fixed them.
- The Sensitivity will set the minimum volume for velocity 1 and give you access to all the dynamics that you want.
- The Reverb: We used an IR of a spring reverb to mimic the most used reverb on this kind of instrument.
- Cabinet: You can turn on or off the amp simulation (based on a Fender 212 cabinet).
- Tremolo: the stereo pan of electric pianos is really a part of the sound, here you can control the amount and speed of it.

- 2.58Gb, 3465 samples.
- 13 Velocity layers for the sustain.
- up to 26 Velocities for the release.
- Sustain pedal noises (up and down), triggered automatically.
- EQ.
- Tremolo simulation.
- Amp simulation.
- Spring Reverb.
- Advanced UVI scripting giving you access to a simple yet powerfull interface and advanced features.

The Following End User License Agreement is included with E-PIAN. This License is only valid for the individual who has purchased an unopened, new and lawfully made copy of E-PIAN from a dealer or distributor authorized by Big Fish Audio.