Emotional Violin - the most expressive virtual violin of all time

If you are looking for the perfect instrument for film scoring, pop music, songwriting, classical or modern avant-garde violin compositions, the Emotional Violin is your first choice! A unique, virtual instrument that convinces through its variety of articulations, its direct and unadulterated sound and unusual playing techniques, including rebowing. With its impressive and at the same time emotional sound, it enables expressions that have never been achieved before.

Emotional Violin has been recorded throughout in a musical context to capture the expressiveness and natural bowing of real instrumentalists. The intelligent scripting enables more than 50 different playing styles and True Legato, making this library extremely versatile. In addition to the usual playing styles and articulations, the Emotional Violin also features extraordinary techniques such as:


Contextual Sampling
Our philosophy during the recordings is called "Contextual Sampling". In order to find the perfect sound, various string instruments were recorded over a period of four years. We came to the conclusion that no technique comes even close to the actual and natural vibrato of a trained musician.

The sampling of real vibrato of course has some conceptual drawbacks, but these recordings are always more inspiring and organic than adding an artificial vibrato. So our goal was to perfectly capture these musical aspects and combine them into a great sounding and easy to play instrument.

The result is a library with unsurpassed authenticity
This wonderful sound is rounded off by a multitude of articulations. Thus, different phrases, turns, variations, bars and closing notes can be used as actually independent phrasings without having to repeat themselves. So that these sounds and articulations can be used appropriately to the context, respective keyswitches such as Delicate Fast, Vivid or Moderate have been added.

Emotional Violin also offers unusual articulations that you won't find in any other library. Simply select from one of the following:

This library also features technical refinements such as Rebowing, which allows you to switch between bow strokes using the Keyswitch - extremely useful for long sustains. The Vibrato Crossfade works in a similar way, allowing you to easily fade from non-vibrato to vibrato.

The Recording
The Emotional Violin was recorded at the Mastermix Studio near Munich in a wood-panelled room with a large ceiling height and the greatest possible distance to the wall. For maximum flexibility, two Neumann KM184 and U87 microphones were deliberately used to record closely. Therefore the room amount is quite subtle and you can use your own effects for further processing. However, you can also use the integrated Convolution Reverb. 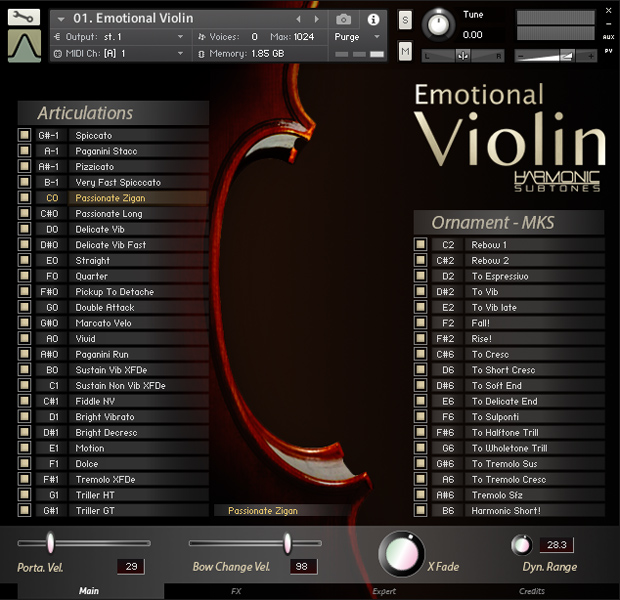 Kontakt
Emotional Violin has three True Legato Master Patches, including the "Romantic Violin" and the "Intimate Violin". These contain about 80% of all recorded articulations, which logically overlap. If, for example, you play an opening note that of course has no legato, you will only hear one note with a natural string opening. As soon as you play legato or sustain notes, you will hear a note that originates from the corresponding context of the original recordings.

In addition, the library contains more than 70 articulations, which are grouped into categories and are available as multi-keyswitch patches - everything from simple sustains to dynamic crossfades between four layers is included. So if you don’t want to work with keyswitches, this way of working is perfect for you.
To ensure the highest possible liveliness, many variations contain up to 9 Round Robins.

Emotional Violin is the second virtual instrument in this series, produced by Harmonic Subtones, the makers of Emotional Cello.

The following list shows, whether the respective Kontakt version is compatible with your operating system:

Additional hard drive space according to the library’s size

The Following End User License Agreement is included with Emotional Violin. This License is only valid for the individual who has purchased an unopened, new and lawfully made copy of Emotional Violin from a dealer or distributor authorized by Big Fish Audio.