The GD-6 Acoustic Guitar is based on a Guild D-40 custom edition electro-acoustic guitar.

We recorded it with a pair of microphones and using the build in pickup.
We sampled it very deeply, all frets of all strings with upstrokes, downstrokes, round robins, releases, staccatos, mutes, palm mutes, hand blocks, slides, hammer ons, pull offs, retriggers, fretnoises, percussions other articulations. All of these details allow us to reproduce the real playing of a guitar player, and easily.
There are basically 4 modes, the solo mode that allows to play melodies, the chord mode that helps playing strums or picking very easily, the patterns mode that does all of the strumming or picking for you and the MIDI mode that allows you to use your preffered midi guitar controler. 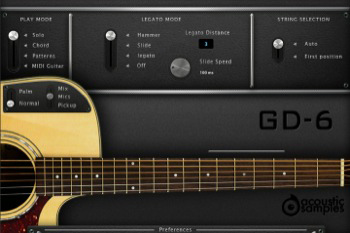 The solo mode is very simple, and is suited to play melodies. It uses a smart hand position system that decides for you where a real guitarist would put his hand and which string he would play. A piano only has one middle C for example, but a guitar offers a few different options and our script will decide it for you. You can of course deactivate it and use only the first hand position if you want.

The GD-6 features our powerful legato engine that will automatically trigger legato, hammer ons, pull offs, or slides and the legato distance will define the maximum interval in which the legato will apply.

The legato mode controls which sample will be triggered when you play legato notes on your keyboard, for example press C2 and then C#2 without depressing C2.

- Hammer, hammer on and pull-off samples will be triggered.
- Slide will trigger slide up and slide down samples.
- Legato will trigger regular sustain samples but will still stop the first played note.
- Off deactivates the legato function.

The legato distance controls the interval in which the legato function is active.

The slide speed is active only when the Slide legato mode is selected and controls the speed of the slide.

The string selection enables the automatic string and fret selection or constrains the hand to the first position. 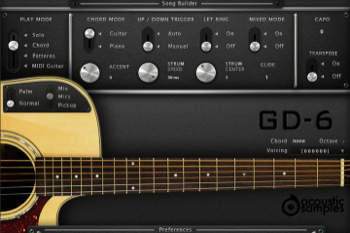 We sampled each fret of each string and we use a chord recognition engine to convert your chords into standard guitar chords. You can also choose from a large selection of chord voicings for each chord.

As a keyboard is not suited to play the guitar, we separated the triggers from the note selection, C4 to C5 are triggers, strum up, strum down, strum for mutes, and then the six separate strings. This makes it very easy to trigger the previously recognized chord in different ways.
Every aspect of the strumming engine can be tweaked to achieve the sound you want.

The chords can also be strummed only using the chords or even mix melodies with chords.

The triggers are set from C4 to C5.

A small chord panel displays the chord that you are playing as well as the octave it is in. Right under it, you have access to a voicing menu that contains all of the possible voicings of that chord on a guitar, and you can select one for each octave.

The Chord Mode can be set in two positions,

- The Guitar mode that separates the notes selection from the triggers. So pressing a chord with the left hand with only make the soft sounds that your left hand would make on a real guitar and you need to trigger the chords or the single strings with the right hand.
- The Piano mode will trigger the chords as soon as you press a chord, the upstrokes and downstrokes are automatic depending on the position in the current bar. Repeating a chord can be done by releasing and replaying any of the notes contained in the chord. It can be more intuitive, but does not allow for as much detail and realism when you play the chords.

The UP/DOWN Trigger controls if the automatic strum up and down is engaged. If set to manual, C4 is the strum down and D4 is the strum up. If set to Auto, C4 acts as a strum up or down depending on the position in the current bar.

The Let Ring controls wether the chord stops when you release your right hand. This can be handy for fast/complex chord progressions.

The Mixed Mode is as its name implies a mix of the solo mode and the chord mode. If you play chords a regular melody with one note at a time or two as a legato, it will play single notes or hammers and slides as selected in the solo mode If you play 3 notes or more or play two notes simultaneously, the chord mode is engaged and it will strum that chord just like in the piano mode.

The Accent, Strum Speed and Strum Center are all linked to the chord simulation. We extracted the data from hundreds of real guitar strums and allow you to control these parameters.

- Accent controls how hard it is to trigger all of the 6 strings with velocity, the min strum number defines the minimum number of strings that are played in a strum at the lowest velocity.
- Strum Speed controls the oversall time needed to strum all 6 strings.
- Strum Center is basically your right hand vertical position over the strings, if it is at the top (position 1), then you will hear more of the first and second string and if you are at the bottom (position 6), you will hear more of the last two strings.

The Capo simulates a real capo, you can choose to make it transpose the chords or not, transposing can be useful if you want to play chords high on the neck.

The Auto Voicing feature enables the different guitar chord positions depending on the octave in which it is played. You can disable it if you play on a small controller or just want to play the first position. 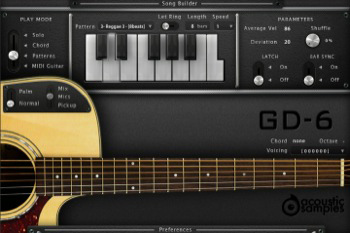 You can assign 13 different patterns of your choice to 13 different notes. Clicking on one of the keys on the interface will launch the pattern, triggering another one will stop the first one and start the new one. You can also trigger the patterns from the keyboard using the notes from C4 to C5. By default releasing the keys will stop the pattern. The velocity at which you press the key will determine the velocity of the whole pattern.

The Parameters can change a few aspects of the current pattern.

- Let Ring determines if the "off" events contained in the pattern will be played or not,
- Length controls the length of the pattern, it can be anything from 1 to the length of the pattern and can be adapted the metrics of your song (even odd numbers),
- Speed you can play the pattern at different speeds, half or double speed for example,
- Average Vel is the center velocity or the pattern, it starts at the velocity of the trigger you played, but can also be modulated over time using a midi controller. By default, we use the modulation wheel to control it,
- Deviation is the difference between the lowest and the highest velocity of the MIDI events composing the pattern, it can also be modulated in real time,
- Shuffle adds groove to the pattern, we created a complex algorithm to allow for shuffle without quantizing, so you keep the realism and are still able to add some groove,
- Latch determines if releasing a key will stop the pattern or not, when turned on, pressing a key will launch the pattern and you will need to press it again to stop it,
- Bar Sync will sync your playing to the bars, meaning that whenever you play a key, the pattern will not start until the next bar starts, this is useful only when working in a sequencer,

The song builder panel is the feature that will let you compose songs extremely quickly. Sometimes playing a series of chords can be complicated, especially if you are not an advanced keyboardist. The song builder allows you to decide which chord will be triggered when selecting only one note. For example pressing only the C will be recognized as a C Major. You can repeat the operation for the whole 12 notes of the octave and this way construct your songs and play them easily.

We included a selection of presets to give song ideas, chord progressions, modes or chord types.

Combine this with the patterns and pressing two keys at the same time is enough to play a song.

The song builder is available in chord mode or in patterns mode.

You can use set all chords using the first menu, it will put the same chord on all of the 12 notes.

The song presets are a set of predefined songs with the right chord progressions, you can change the root if needed and the progression is detailed under song info.

The mode presets is a list of most music modes and their corresponding chord progressions, you can change the root of needed.

When selecting one of the presets, some keys will appear in red and the corresponding chord will be a "5th". This means that there is no "valid" chord for this note in the selected song or scale. You can of course set each chord manually by clicking on them and selecting its kind, even starting from a preset. 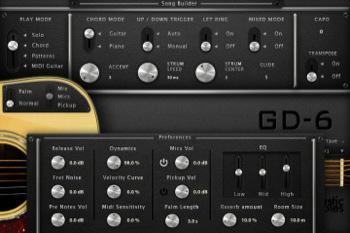 If you own a MIDI guitar and want to expand its sound capabilities, then the MIDI mode is for you, all you need to do is select the 7 different MIDI chanels your guitar outputs and you are ready to play.

Every aspect of the library can be tweaked, the release, fret and pre-notes volumes, as well as the midi response of your keyboard.

A three band EQ and a reverb module can be adjusted from the preferences panel, and you can enable and load/unload the pickup or the microphones.

The MIDI guitar mode allows you to play the GD-6 using a midi guitar controller, all you need to do is select the 6 midi channels. You maybe have to use the set patch as omni to allow the plugin to respond to all midi channels.


The Preferences panel can be opened by clicking at the bottom of the interface, in there you have access to all of the different parameters of the library.

The Following End User License Agreement is included with GD-6 Acoustic Guitar. This License is only valid for the individual who has purchased an unopened, new and lawfully made copy of GD-6 Acoustic Guitar from a dealer or distributor authorized by Big Fish Audio.

ALL RIGHTS NOT EXPRESSLY GRANTED ARE RESERVED. © 2013 Acousticsamples."