When The Gipsy Kings invaded the airwaves in the late 1980s, the sound of Southern French and Catalan Gypsy Rumba took the world by storm. Millions of fans discovered centuries of tradition that had taken birth in the small communities of Arles and Montpellier, France. French-American producer Josquin des Pres grew up in the south of France, the epicenter of this now popular music genre, originally popularized by legendaries Jose Reyes and Manitas de Plata. Years later their sons, the Reyes, and their cousins, the Baliardos, would become The Gipsy Kings.

These 12 compositions are created in a complete song format with intros, verses, choruses, bridges, outros, and ending notes allowing you to create your own personal version and mix.

Gypsy Fiesta is the ideal toolbox for soundtrack composers, songwriters, producers, and DJs, for use either as a springboard for your own passionate Gypsy-influenced masterpieces or to add a splash of Gypsy passion to your already existing music tracks.

Gypsy Fiesta has been formatted in the most widely-used formats: Apple Loops, Acidized WAV, and REX files, making it usable in virtually every piece of software and hardware in use on the market today. 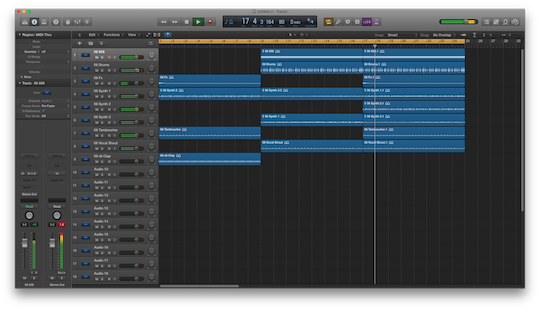 Gypsy Fiesta has been formatted in all the industry standard file types: Apple Loops, Acidized WAV and REX. Every piece of commonly used hardware and software will be compatible with at least one of these fully developed and usable formats.

Each audio file has been expertly cut and edited to loop perfectly, and has been recorded in the highest quality 24-bit rate to ensure absolutely top quality end results.

If you work primarily with Apple products, be sure to utilize the extra loop tagging functionality in Garageband and Apple Logic as well as Apple's proprietary time stretching and pitch bending algorithms.

If you're working inside Protools, Cubase, Fruity Loops, Ableton Live, Sony ACID, or any other DAW on the market, the Acidized WAV files are the perfect fit for time stretching and pitch bending capabilities. The Acidized WAV files can also be used as standard WAV files in almost any music tool in production today.

Beat-makers and artists who love sampled melodic slices can take advantage of our REX/RMX format that utilizes all the powerful programming found in Stylus RMX and the Dr. Octo REX player in Propellerheads Reason.

The Following End User License Agreement is included with Gypsy Fiesta. This License is only valid for the individual who has purchased an unopened, new and lawfully made copy of Gypsy Fiesta from a dealer or distributor authorized by Big Fish Audio.