The Mark79 is a Classic 73 Keys Electric piano from 1979 (MarkII) recorded with the direct output plugged into a tube preamp.

The MarkII model was issued in 1979 and maor jazz and jazz-rock stars like Chick Corea have made its sound very famous. It really is very different from the MarkI but still has that incredible sound that everybody knows and loves.
We wanted to give this instrument something special and to build the library in a way that any player would get a feeling of the real thing so we decided to also sample it "acoustic" meaning without pluging it into an amp. 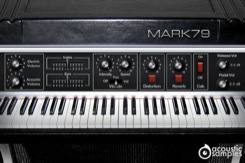 Default Interface
In this panel, you can change most of the aspects of the library to make it sound just like you want.
You can adjust:

- Acoustic / Electric volume controls.
- EQ, Bass and Treble: a parametric EQ with the two knobs available on the real EP.
- Vibrato: the stereo pan of electric pianos is really a part of the sound, here you can control the amount and speed of it. We also addedthe possibility of a volume tremolo as players ofter use the volume knob to create that effect.
- Distortion: the MarkII has often be played with a distortion so we decided to add it.
- Reverb: We used an IR of a spring reverb to mimic the most used reverb on this kind of instrument.
- Cabinet: You can turn on or off the amp simulation (based on a
Fender 212 cabinet).
- The release Volume: the sound produced when you release a key if a note was going on.
- The Pedal Noise: the sound produced when you press or release the pedal, it adds a lot to the realism.
Technical description:

The Following End User License Agreement is included with Mark79. This License is only valid for the individual who has purchased an unopened, new and lawfully made copy of Mark79 from a dealer or distributor authorized by Big Fish Audio.