This massive 12.4 GB collection (6.2 GB of 24-bit WAV files) of Ambient and Cinematic Rock is the perfect choice for Film, TV, Documentaries, Games, Sound Design, Film Trailers, Commercials and Contemporary Ambient and Cinematic songwriting. Whether you're needing a lush soundscape to add just the right mood to your documentary, some ambient piano parts to add life to your video game or you're needing a full out pop-rock band for your next hit record; this library has you covered. Zen showcases composers and artists such as Explosions in the Sky, Coldplay, Cliff Martinez, Mogwai, Michael Brooke, Sigur Ros, Band of Horses, Red Sparowes, Bon Iver, Hans Zimmer, Fleet Foxes and many others!

ZEN contains Drums BYO (Build Your Own) which give you the freedom to create amazing drum grooves quickly and easily. Drums BYO contains individual drum kit pieces (kick, snare, hi-hat, toms, cymbals; etc) that you can use individually or mix n match to create an unlimited variety of drum grooves and rhythmic textures. The library also contains an enormous collection of instrument kits which contain separate and distinct instrument loops (Drums, Electric Bass, Guitars Clean, Guitars Distorted, Guitar FX, Pianos, Keys, Keys FX and Vocals) that give you the freedom to simply use one layer of the instrument by itself or increase the depth, complexity and beauty by adding additional complimentary instrument parts. By giving you the ability to add the amount of depth and texture needed, along with multiple variations and rhythmic figures, ZEN gives you total creative freedom and allows you to tweak to your hearts content!

ZEN also includes an enormous section of Xtras which contains Drum Hits along with Guitar and Keys Soundscapes. Drum Hits are included for creative layering, re-sampling and re-triggering of additional drum parts. The Guitar and Keys Soundscapes (40 loops in total) are each a minute plus in length, gives you tons of variations, allowing you to create instant mood, atmospheres and dramatic textures in seconds. Finally, ZEN also includes over 2 GB of Multi-Drums from the "Drum Loops" sections of the instrument kits for you to mix n match, remix and adjust anyway you like it. Let the epic power of ZEN spark your creative flames and inject your projects with the raw emotion of today's hottest Ambient and Cinematic music.

This product is part of Big Fish Audio's KLI series which includes a custom Kontakt interface. The Kontakt format includes patches of each sample and loop. Customize each loop with the "sliced loops" patches. The Sliced Loop patches lay out each individual slice of a loop across the keyboard, making it easy to create new and original custom parts. The "Kit Combos" allow you to play through full sets of loops quickly and easily with a custom mixer and a host of included fx. Finally, a patch of drum hits have also been included. Create, arrange, tweak, and mix all within the Kontakt format.

The KLI version of this product comes with the KLI 2.0 update and comes in both Kontakt 4 and Kontakt 5 versions. For those with the full version of Kontakt 5, take advantage of the new high quality and extremely flexible new time stretching algorithm as well as a bunch of new included FX. 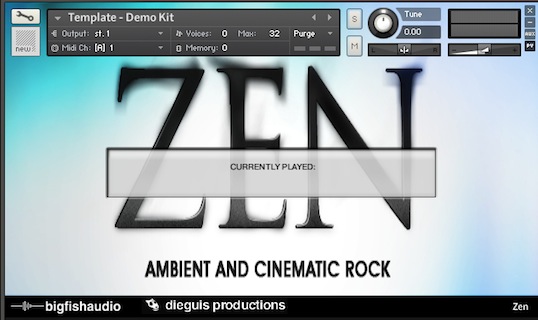 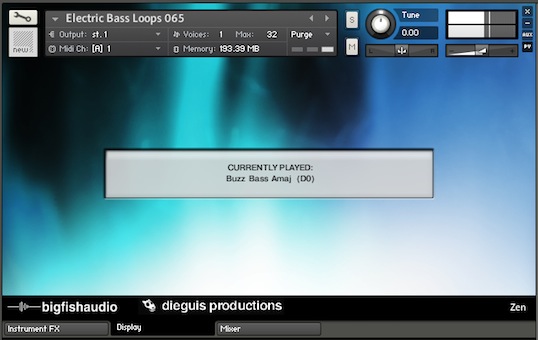 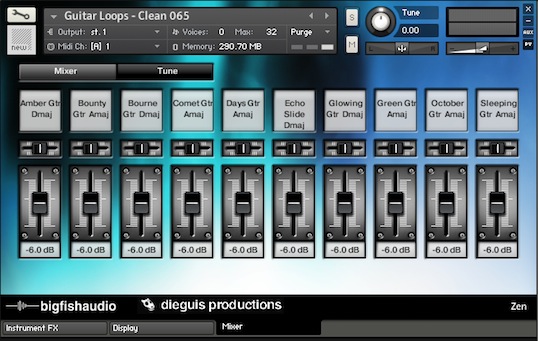 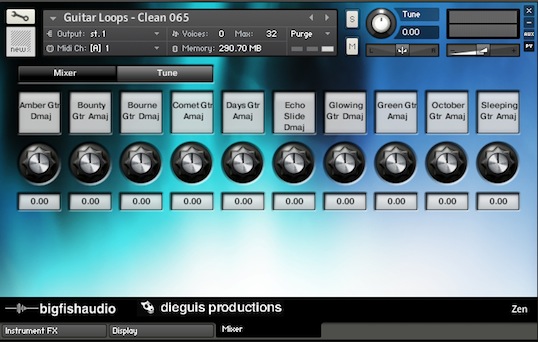 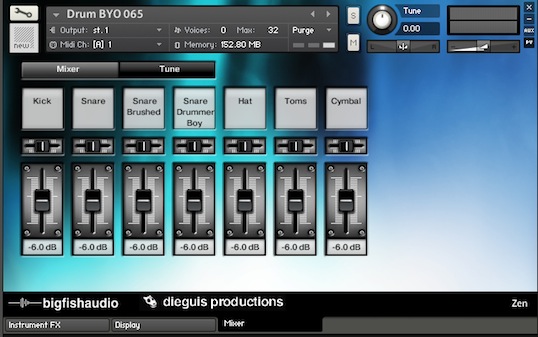 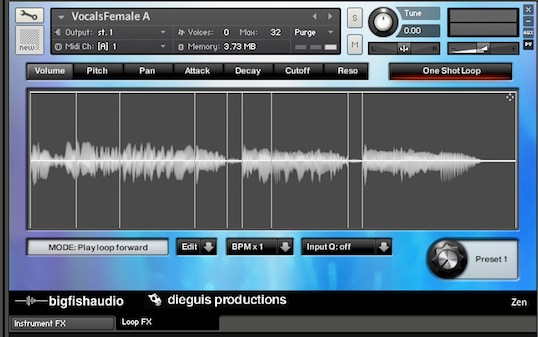 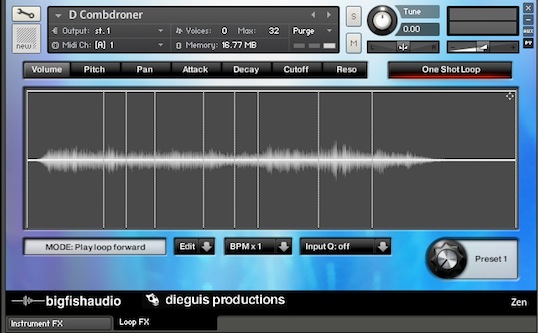 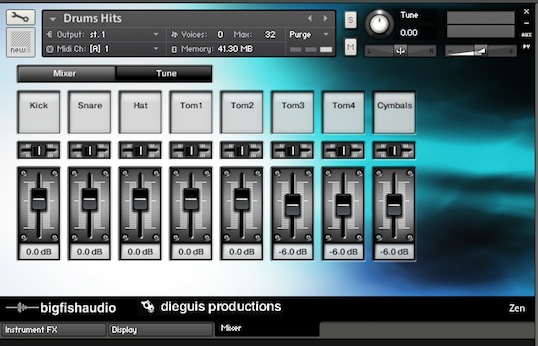 Texture: The rich, raw, and powerful sensation that occurs when two entities meld together to form the perfect blend of shadow and light, love and hate, and right and wrong; the birth of a song's soul.

Weave sensuous layers of musical texture into your tracks and listen as your songs take their first real fresh breath of life. Feel the first fire of passion, the spirit of love, and the rush of heady laughter as it intertwines itself in your songs.

The Textured series is a compilation of sonic layers that embody emotional elements of realism and fantasy, fused to create tracks so full of life, you'll be able to feel the soul of the music as it comes alive. This series knows no musical boundaries and enhances all musical genres its placed with. So whether your needing a few rhythms and textures to add dimension to your existing tracks or want that one of a kind melodic hook that can jump start the creative juices.

Taste it, feel the smoothness of dulcet tones, or the rough crash of thundering staccatos on your senses. Explore your inner musician, create tracks never before realized and make music that stands out. So leave behind a world of monotone and explode into a world of vibrant richness with the Textured Series experience.

The Following End User License Agreement is included with Zen. This License is only valid for the individual who has purchased an unopened, new and lawfully made copy of Zen from a dealer or distributor authorized by Big Fish Audio.

"The samples contained on our products are licensed, not sold to you, the individual end user, by Big Fish Audio. This non-exclusive, non-transferable license is granted only to the individual end user who has purchased an unopened, new and lawfully made copy of this product from a dealer or distributor authorized by Big Fish Audio. All samples remain the property of Big Fish Audio and are licensed only for use in the creation of a recorded or live performance that includes the licensed samples as part of a derivative musical work created by the licensed end user. This license expressly forbids resale, rental, loan, gift or transfer of these samples in any format or via any medium, except as part of a derivative musical work. This license does not allow you to include the samples, whether unmodified or as part of a derivative work, in any music library or sample library product. However, a "special use" license may be requested from Big Fish Audio, free of charge, if you wish to use this product as part of a musical work intended for use with music libraries (some conditions apply, and Big Fish Audio retains the right to refuse any request that does not meet those conditions). Any unlicensed usage will be prosecuted to the maximum extent possible under the law."

Free samplepack featuring one free kit of loops. This pack only contains a partial set of loops from the included kit. The full library contains various other loops and samples from the kit. This pack contains WAV, REX, and Apple Loop versions of each loop.