Zodiac is a unique-sounding Virtual Instrument designed to provide composers and producers with a collection of original sounds and instruments suitable for film or TV scores, video games, and all types of ambient and experimental music.

No synthesizers were used to create the instruments in Zodiac. Instead, all instruments were created from organic sources such as found sounds, sonic manipulations inspired by classic Musique Concrete, Experimental and Avant Garde Music compositions, prepared or heavily processed musical instruments, and audio recordings subjected to extreme sound design techniques.

Zodiac features over 200 patches and Multis (over 8GB of uncompressed wav data), divided into six categories:

Zodiac's instruments range from beautiful and ethereal soundscapes to wildly inventive percussion and mysterious, haunting, atonal and experimental sounds that defy easy categorization. Search through Zodiac's patch folders, and you won't find anything like a regular bass, guitar, keyboard, or drum set. Instead, you'll find a collection of sounds that are quite unlike those made by any standard instrument.

Not only does Zodiac feature a constellation of ready-to-use instrument patches, it's also a powerful sound-design VI. Use Zodiac's simple but versatile controls to dramatically alter, sculpt, or tweak and customize sounds to fit your individual style. However, you don't even need to touch a single control to get a variety of sounds from Zodiac's preset patches.

Zodiac is made for experimentation: hold down a key on many instrument patches and a sound loops and morphs, revealing surprising musical timbres and harmonic strata. Play an instrument one way and it has a percussive quality; play it another, and the notes expand into a pad or atmosphere. Play a patch in one octave and it sounds dreamy and surreal; play it in another octave and it behaves and sounds quite differently.

No matter what soft synths, sound modules, or VIs you already own, Zodiac will expand the palette of sounds in your sonic tool box and add a unique character to your music. 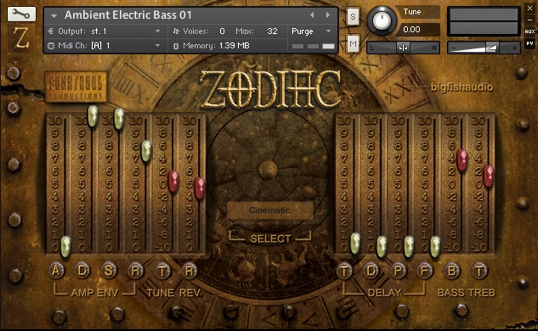 Despite its somewhat enigmatic appearance, Zodiac's Graphic User Interface (GUI) is quite simple to use. Here's the key:

ON either side of the Zodiac logo is a control bank consisting of SIX levers. Under each lever is a single letter, which stand for the following:

Note that the four white-tipped levers on either side represent a grouping of related controls, and have a range of 0 to 10.

Note also that the red-tipped levers represent controls not related to the white groups, and that three of these have a range from -10 to +10.

Use command-click (MAC) or control-click (PC) to return any of the levers to the default setting of zero.

The window below the Zodiac logo contains a drop-down menu, with a list of fifteen very different-sounding Convolution Reverb IRs. Click on this window if you'd like to change the type of reverb on the instrument being played. Note that the R(everb) lever to the left of the window controls the amount of reverb.

Zodiac is powered by the industry-leading Kontakt engine. It is compatible with VST, AudioUnit, AAX (Pro Tools 10) and RTAS (Pro Tools 9 & 10) plug-in formats allowing it to work seamlessly within any major sequencer, in addition to standalone use.

- Over 150 different instrument patches and 50 Multis

The Following End User License Agreement is included with Zodiac. This License is only valid for the individual who has purchased an unopened, new and lawfully made copy of Zodiac from a dealer or distributor authorized by Big Fish Audio.

"End User License Agreement: The samples contained herein are licensed, not sold to you, the individual end user, by Big Fish Audio. This non-exclusive, non-transferable license is granted only to the individual end user who has purchased an unopened, new and lawfully made copy of this product from a dealer or distributor authorized by Big Fish Audio. All samples remain the property of Big Fish Audio and are licensed only for use in the creation of a live or recorded performance that includes the licensed samples as part of a derivative musical work created by the licensed end user. This license expressly forbids resale, rental, loan, gift or transfer of these samples in any format or via any medium, except as part of a derivative musical work. The samples may not be included, whether unmodified or as part of a derivative work, in any sample library product. Any unlicensed usage will be prosecuted to the maximum extent possible under the law."

Aside from their extensive library of loops, Big Fish Audio have created Zodiac, a Kontakt-based virtual instrument with your sound design and soundtrack needs in mind. Hollin Jones...

You could be forgiven for thinking that most of Zodiac's sounds derive from synthesizers. In reality, the sources for the library's unearthly collection of pads, evolving soundscapes, melodic instruments, and percussive timbres come from found sounds, heavily processed...

Rich in atmosphere, Zodiac offers a more organic approach in what is becoming a very electronic world. Andy Jones digs the...

The entire concept behind Zodiac is aimed at composers, media/tv producers, game, and film music creators. The library is made up of natural sounds, found sounds, natural instruments, and other crazy noises made by banging, scraping, hitting, and overall abusing any type...