Dark ERA, ancient pagan music and the sound of the Vikings

With Dark ERA, Eduardo Tarilonte – the master of mystical sounds – leads us back into the dark age where legends were born and where old northern gods still determined the fate of mankind. This library allows you to discover sounds to which the vikings and other already forgotten cultures and tribes were celebrating and singing their myths.

The fascinating sound of Dark ERA ranges from the transcendental drones of the ancient stringed-harp Tagelharpa to the unmatched grace of the gut-stringed Lyre to the distinctive and characteristic sound of the Nordic bone flutes and the overtone flute Fujara. Goose bumps are guaranteed with the sound of war horns such as the wooden Lur, thunderous mighty percussion, a full ensemble of frame-drums as well as mystical throat chants.

These instruments are complemented by an impressive collection of pulsating pads and atmospheric soundscapes which evolve over longer periods. These unique sounds ensure that Dark ERA can clearly be regarded as the next masterpiece created by Eduardo Tarilonte. 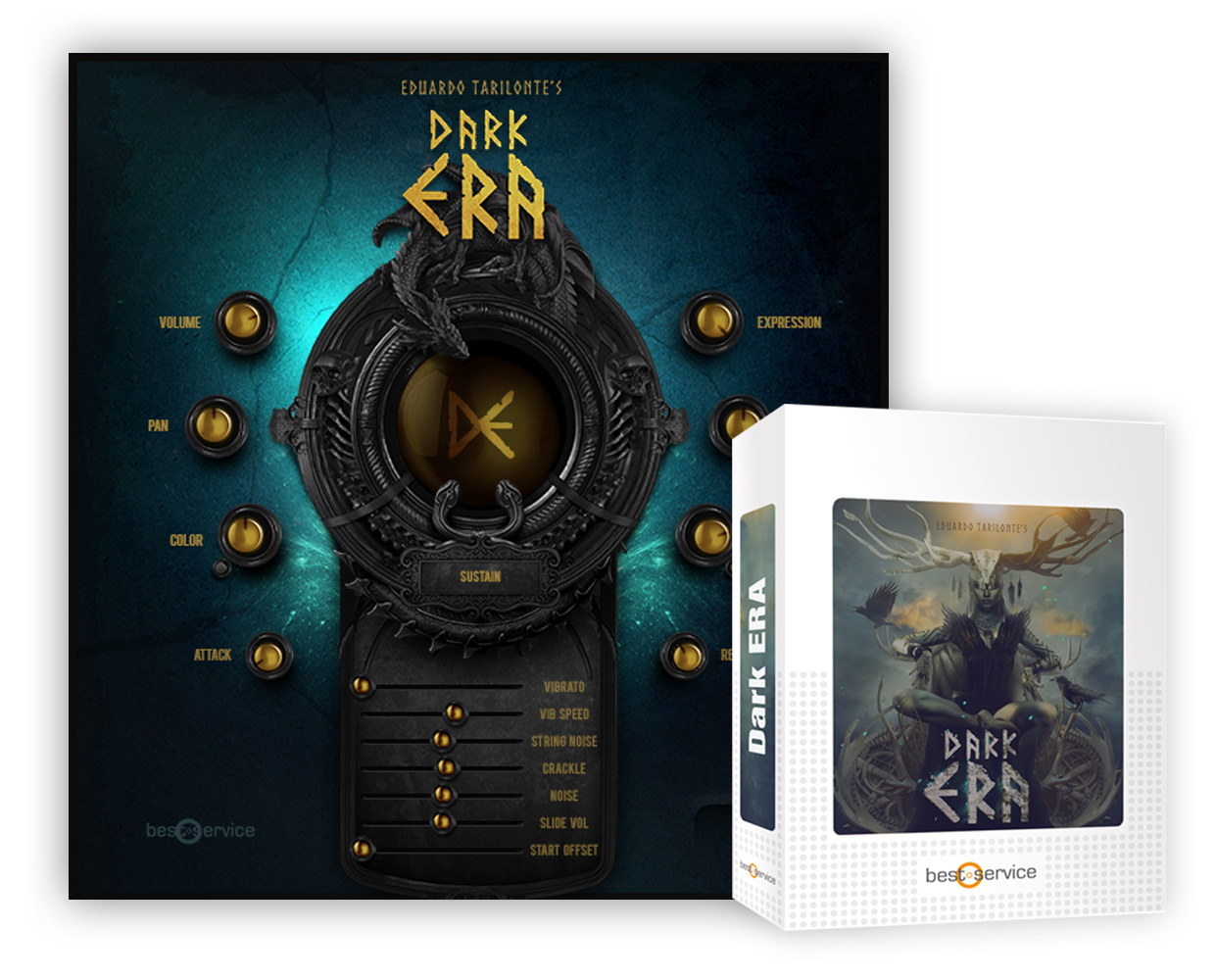 Dark ERA offers more than 50 instruments consisting with over 20,000 samples. The library contains seven string instruments, 17 wind instruments and 33 drums and percussion. In order to maximize playability, several play techniques have been recorded and made available in the library respectively our powerful cross-platform compatible sample-player Engine. The wind instruments offer different articulations as well as true legato. In addition, the flutes provide some really unusual and haunting effect sounds.

Furthermore, the string instruments offer round robin samples for notes being picked in up and down directions. The plucked instruments were recorded with different play techniques such as using a plectrum, fingers or being strummed.

The instrument collection is complemented by more than one hundred programmed soundscapes. These are partially rhythmically animated to pulsate in sync with the current tempo or to create unreal atmospheres using complex sound textures. These textures consist of several elements which can be adjusted in level and panning to your liking in the mixer page of Engine.

To support the sound rhythmically, dedicated Epic Loops have been designed. These consist of up to 20 instruments and up to 16 separate elements which can all be individually adjusted, allowing to flexibly arrange beats. Available are four variations for each main loop, different fills and endings (ensemble and single hits) as well as a pulsating sound matching the rhythm. The loops will automatically adapt to the tempo of your DAW.

The rhythmic pads containing melodic as well as rhythmic elements gap the bridge between drums and solo instruments. Just as for the soundscapes, the individual pad elements can be individually be panned and mixed.

Another specialty of Dark ERA is the vocal section. Vocal rhythms, being inspired by the Inuit, can be constructed and arranged from single notes. 24 MIDI-files serve as templates which trigger and play the individual shouts. Of course, the rhythms can be edited or even be created from scratch.

The throat singing recordings have been divided into four styles. It is also possible to add harmonics using a dedicated slider. Shaman ritual chants and sole vocals add liveliness and authentic elements to the music.

Who is it for?

This library is the perfect instrument for movie soundtracks and television documentaries covering corresponding topics. At the same time, the library is equally suited for historical music productions as well as for ambient music. In addition, it provides suitable stylish background music for games within this setting.

The stringed and wind-instruments as well as some of the drums being used for this library have been handmade by the master instrument maker Benjamin Simao . The instruments were performed by :

Sonically, Dark ERA is fully compatible to the other libraries of the ERA-series since it has again been recorded by Jorge Calderón Muriel in the Eldana Studio in Spain, using highest quality equipment such as the Kahayan 4K7 microphone and 12K72 preamp. The instruments have been close mic’ed in order to capture all details and to provide a direct sound experience which can be flexibly edited and shaped in all directions by external tools.

***Crossgrade for owners of at least one ERA Library

Do you own one of Eduardo Tarilonte´s ERA Libraries? If so, this crossgrade gives you the opportunity to purchase Dark ERA at a discounted price.

The Following End User License Agreement is included with Dark Era. This License is only valid for the individual who has purchased an unopened, new and lawfully made copy of Dark Era from a dealer or distributor authorized by Big Fish Audio.