Cons: A couple of the kits have digital artifacts in the guitar samples which may take additional time to clean up.


Canyon Cinematic Texture Guitars is Big Fish Audio’s latest foray into the Cinematic market with a nod towards Western, South Western, “Big Country” guitars. Its country roots are clear, but this is not just another country music title.

Big Fish Audio has been developing highly versatile loop and instrument collections for over 25 years and this title only compliments their collective experience in delivering well thought out titles.

The lure of great American West is as timeless as the canyons themselves. Film makers like John Ford, Tarantino, the Coen Brothers, even podcasters like Drift & Ramble, all embrace the untamed adventure of the vast unknown. But aside from the ubiquitous eagle screech sound effect, how can you describe a wide open Western scene without guitar music?

Canyon Cinematic Texture Guitars is a solid choice for producers looking to build open, expansive themes for game, documentary and western oriented film work. There are 25 construction kits offering guitar parts for a broad variety of uses and variations for each kit. Like many of Big Fish Audio’s previous guitar only releases, there are strong performances and a good variety of guitar tones for each kit, giving you more flexibility in creating unique sounding themes and underscores. Each kit sounds Western but with a modern flair to keep them feeling as open and fresh as the great outdoors. Kits range from 60 to 133 bpm, giving you plenty of inspirational fodder whether it be yearning for wide open spaces, a wild horseback ride through narrow canyons or the somber sorrow of placing an outlaw pal in a pine box.

To be certain, there are plenty of classic undertones and the guitar tones are classics, too. Authentic is a more appropriate description as the list of guitars and amps used to make this set are impressive and unmistakable. But while these sounds are firmly rooted in tradition, the kits have a thoroughly modern feel. And just like the canyons of the Badlands, Bryce or the grandest canyon of them all, Big Fish Audio and Sample Factory have produced a set of themes and loops that are poised to stand the test of time.

In the KLI version, Canyon steps beyond typical loop based construction kits, in that guitar parts are broken out into phrase patterns, giving you the ability to rearrange kits and create variations from the intended kit form and these can also be reversed and retriggered as “sliced loops.” Even though no additional instrumentation, such as bass or drum loops are included, Canyon’s guitars parts are developed to get you very close to a completed score without much more effort.

As is always the case with Big Fish Audio KLI series content, kits are laid out in fully produced demo versions, making it easy to extract fully produced music beds in seconds. To preview each of the 25 kits, open Kontakt and navigate to the place where the Canyon Cinematic Texture Guitars folder is stored through the Kontakt file browser. Double click the Kontakt Instrument marked “DEMO.nki” to load the demos and play any of the designated keys to preview the kit mapped to that specific key. You’ll see that each kit is described on the main screen in Kontakt, giving you kit number, tempo and key signature so you can easily set up your DAW with similar values for each project. 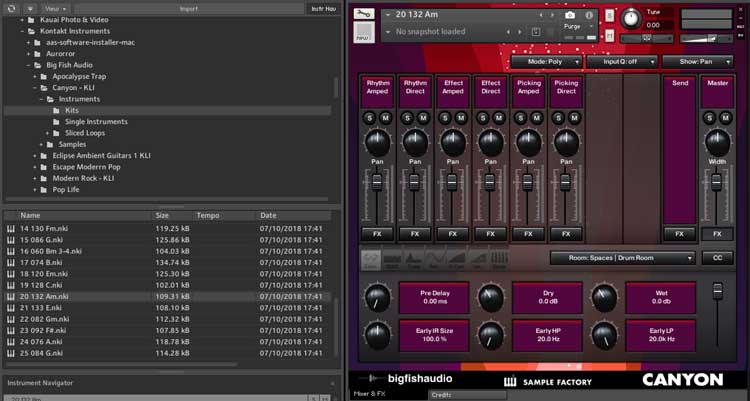 Navigating on the “kits” folder, you’ll find that each kit is laid out on an intuitive key map so you can quickly identify and play each part of the kit. Note that the blue keys are mapped to playable loops for each kit while the red keys are for articulation and key switching. Green simply tells you what’s currently selected. It’s here in this screen, where most of the work can be done to adjust pitch, effects, like reverb, EQ or dynamics. You also have the option of turning off the amps for each instrument, in case you want to use your own amp simulators and effects to sculpture a more customized sound. To turn off the amp used for each file, you can simply click “mute” (or letter “M”) next to each channel, which will result in playback of a DI (Direct = no amp) recorded version of each loop. You can see this more clearly in the next screen shot which not only shows the sliced loops screen but also the samples for each kit in the file browser including a folder marked “AMP” and “DI”. This can be exceptionally handy for making your loop based creation sound nothing like its original source files. 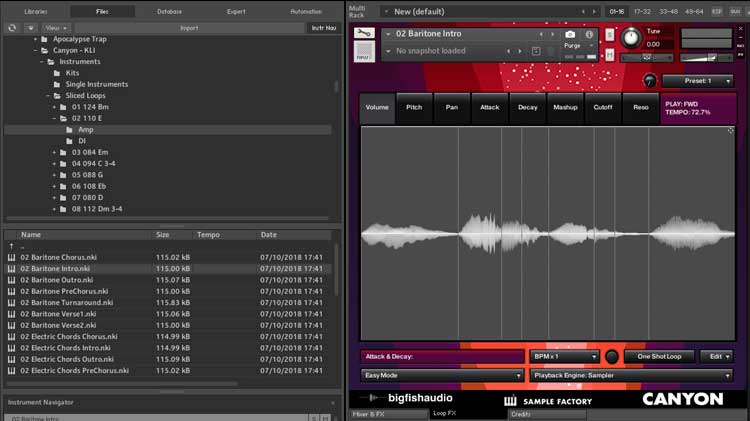 The sliced loops offer even more customization possibilities, providing further inspiration or just downright wacky sounds. In the fourth demo video I tried to illustrate how a reversed loop of the guitar verse can alter (or extend) the theme or create multiple underscore variations from a single kit. The sliced loops folder contains two versions of each kit. Again marked AMP and DI, it’s a nice quick way to access the files with or without the added coloration. Then loops can be played back from various trigger points within the loop, reversed, effected or pitched to derive as many possibilities from each of the 1200 + loop files as possible.

Another unique feature with this loop set is access to all the various guitar instruments outside of their kits. This allows some flexibility as the loops are arranged by effect and purpose, rather than by kit, further enhancing the inspirational aspect of the loops.

I strongly recommend you investigate this collection fully to be sure it meets your needs. Demos can be found on the product page at Big Fish Audio, as well as additional details about this product. Be sure to check out the excellent KLI demonstration videos, too. These will help you get the most out of your KLI enabled product if that’s what you’re into.

The KLI version of Canyon is downloadable as a single compressed file. It weighs in at about 4 GB. Once expanded and installed it reveals 6.52 GB of content. That’s 1,291 total Kontakt patches. It requires the full version of Kontakt (Build 5.8.0 or higher.) It will not work with the free Kontakt player.

The multi-format includes 6.26 GB of non-compressed Apple Loop content or 1275 files as well as an Acidized Wav file version that expands to 6.34 GB of content and the same number of files. Rex files are also included, weighing in at just 2.37 GB of content that once expanded, reveals 1,411 Rex files.