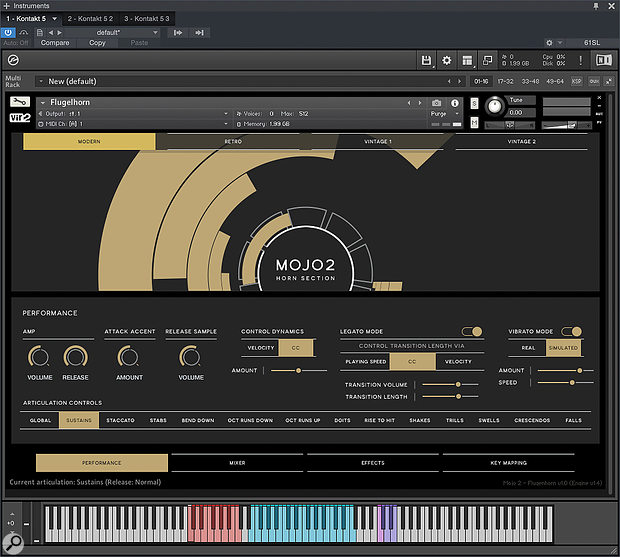 Mojo 2's interface is cool, clear and business-like. Here, the Sustains page of the 2GB Flugelhorn patch is shown with Legato and Simulated Vibrato modes enabled.

Mojo 2 Horn Section is an ambitious instrument that aims to succeed where other virtual horn sections fail.

The modern‑day horn section — various combos of sax, trumpet, trombone and other brass or reeds — forms a crucial and distinctive part of the sound of big band, soul, funk and ska. Think Benny Goodman, Birth Of The Cool, James Brown's JB Horns, Tower Of Power, or Steely Dan/Don Fagen...

Hardware workstations frequently fail miserably with horns and their various specialised playing techniques, and even dedicated sample libraries sometimes only scrape the surface. With Mojo 2, Vir2 are aiming to change all that. It builds on their first Mojo Horn Section library from 2009, both in scope, installation size and sophistication of the user interface and player experience. It's still a Kontakt library, and requires Kontakt 5 (Player or full version, 5.8.1 or higher) on at least Mac OS 10.11 or Windows 7. As with any ambitious library, reckon on using recent, reasonably potent PC hardware with plenty of RAM and a fast SSD for best results. Installation size is just under 65GB, by the way, so it's not totally out of the question for laptop users.

Let's quickly run over how Vir2 have designed Mojo 2. Rather than any pre-configured section combinations, the library presents as a set of individual Kontakt patches, one each for Alto, Tenor and Baritone Sax; Trumpet, Muted Trumpet and Piccolo Trumpet; Trombone; Muted Trombone and Bass Trombone; plus French Horn, Flugelhorn and Clarinet. These all load up as solo instruments but can be switched to form unison ensembles of two, four, six, eight or 10 players, with adjustable stereo spread and 'Humanize' factor. Working with multi-instrument combinations is, of course, just a case of loading the requisite combo of Kontakt patches. That certainly offers the greatest degree of flexibility for users to build their own sections, but has a potential knock-on effect in CPU, disk‑streaming and memory demands.

The Crescendos and Swells articulations can be tempo-sync'ed for typical rhythmic work, in the Performance page.

With a Mojo 2 instrument loaded (they typically occupy something around 0.5-2 GB RAM), we're then largely on familiar ground, with separate key ranges for playing and switching articulations. Some articulations are standard fare, and self explanatory: Sustains, Staccato, slightly longer Stabs, Bend Down, and Oct[ave] Runs Down and Up. There's also Doits (an upward bend from the main note), Rise To Hit (a brief upward run to the main note), Shakes (mostly two-note tremolos of varying interval), Trills, Swells (quiet to loud), Crescendos (the classic horn section attack/drop/crescendo) and Falls (aka fall-offs). As you'd expect, you can cue these up in real time to support surprisingly expressive and realistic playing. That's helped by extensive multi-sampling, most articulations having several velocity switched layers, and a cyclical or random round-robin implementation. Two articulation types, Swells and Crescendos, can adapt in length to either an absolute time (0.5 to 12 seconds) or, probably more usefully, anything between 1 and 16 beats of your DAW's current tempo.

An additional key range appears when using the Sustains articulation, and it controls how notes end. The Normal setting, the default, lets a note die as you'd expect. But selecting the Doits, Falls, Trills or Shake option causes a key release to trigger one of those, to make sustained notes end with a flourish.

There are two other key points about Mojo 2's design and implementation. One is a multi-mic scheme, which allows the user to balance Close, Near and Room perspectives on a per-instrument, per-instance basis. By default, all instrument patches have these individual mic feeds disabled in favour of a single Full Mix blend. That's sensible, as the demands made on your computer by running multiple mic perspectives are cumulative, ie. running a bespoke Close/Near/Room mix asks more than the Full Mix alone. Having said that, all of the perspectives feed the same set of on-board effects, which are extensive, sound good, and encompass EQ, cabinet simulation, stereo width, two kinds of saturation, compression, limiting, delay and reverb.

Finally we come to the 'Eras' tab. The four options here dial in different historical flavours — doubtless via ready-rolled behind-the-scenes effect chains rather than anything happening at the sample level — which range from the pristine unsullied capture of Modern, through Retro's more saturated and mildly overdriven vibe, to the mid‑range honk, dirt, noise and constrained frequency response of Vintage 1and 2. It's a fun feature, quite neat for evoking Louis Armstrong in his prime, but possibly a touch gimmicky given that when going for this kind of deliberate ageing you'd almost certainly want the rest of your mix to sound similar, and matching what Mojo 2 is doing would largely be a guessing game.

Putting Mojo 2 to use proves very straightforward and flexible. The spacious GUI is a big upgrade on the original Mojo's more generic and fiddly outward appearance, and is a breeze to use. There is a PDF manual, which is brief and extremely clear, but it's possible you may never need it.

Most tailoring of Mojo's behaviour takes place in the tabbed Performance page. All articulations are affected by global-level mix controls, knobs for the volume and probability of key noises, velocity curve options, and a three-way round-robin mode switch. Many articulations have release sample volume knobs, poly/mono switches, and options to control dynamics/level through key velocity or MIDI CC. A few are more specialised still, though. Sustains adds a volume control for Attack Accent (an overlaid punchy, tongued start to the beginning of the note), a Legato Mode (that adds note transitions to monophonic melodic playing), and a choice between a true recorded vibrato, a simulated alternative that responds to MIDI CC, or no vibrato at all. Swells and Crescendos have the absolute time or beat sync'ed options I've mentioned already. And, finally, Falls gets three different length options: short, medium and long.

Last but not least, there are two whole pages dedicated to various additional settings. Most take the form of MIDI learn facilities, which is great, because they allow users to re-map the articulation and release sample key ranges, the MIDI CCs used to control vibrato speed and depth, and legato transition length, amongst many other things. Via MIDI CC, also, you can take control of each Era's built in noise (which becomes progressively more like the hiss and scrape of a gramophone). The noise, incidentally, is audible from the first triggered note to the moment you switch to a different Era, or close your DAW project.

Mojo's back end adds a great deal of flexibility to re‑map articulations, as well as control a number of expression-related parameters via MIDI CC.

It should be pretty clear already that under its inviting and easy‑to‑use surface Mojo 2 is a pretty vast and extensively programmed survey of the horn section.

First impressions of all the instruments are really pleasing. All sound convincing, and in the saxes and trumpets particularly there's a nice looseness and 'sass' that is going to suit most of the musical objectives of this library really well. A tight-lipped orchestral library this is not... Just noodling around amongst the Sustains and Staccatos articulations reveals a surprising level of realism, and for many straightforward sax and trumpet licks, or flugelhorn pads say, you really could be hard pressed to say whether you were hearing the real thing or not. Legato mode adds in a useful dose of realism, the Ensemble feature instantly dials in the section sound, and when it comes to the extended techniques, well, they're the real deal: they sound great, and you won't achieve them any other way. Crescendos especially are beautifully implemented, with apparently flawless time-stretching. The sound stays smooth and coherent even at the slowest DAW tempos, even if a stretched final 'arrival' sometimes gives the game away.

However, there are some points of unevenness. It's clear that not all articulations for some instruments were recorded in the same way, in the same acoustic, or by the same player. Some sound dark, dry and narrow, others bright, reverberant and wide. This is immediately noticeable for Tenor Sax and Piccolo Trumpet, but not for Flugelhorn and Clarinet, so it's a mixed picture. It's not noticeable if you're using single articulations in isolation, or have the instrument buried in a big orchestration, but glaringly obvious if you try to knit together continuous solo lines with lots of articulation switching.

General tuning accuracy improved and the prevalence of programming glitches decreased with some updated Kontakt patches I received during my time testing Mojo 2. However, the likeable looseness I referred to a minute ago does apply to tuning, to an extent. Playing octaves for Trumpet Sustains, for example, reveals everything from bang-in-tune to 'ballpark', shall we say, as the different round-robin combinations are explored. For big band scoring, and early Miles Davis mock-ups, great. For really tight modern funk, not so great. It'd be nice to think that those Era settings could somehow progressively tighten tuning too, or for there at least to be an option to instantly switch in squeaky-clean round robins.

One other main gripe. Attack Accents for some instruments (clarinet, I'm looking at you) are not very well integrated into the main note, and can end up sounding like an exaggerated slap echo when you play fast. The release samples feature doesn't always work well, either, for a similar reason. You can understand, perhaps, how a screamy Doit is never going to sit properly at the end of a breathy, pianissimo Sustain, but I think a Fall or Trill could, and should. Instead, many of these also have an unbridled quality (and occasionally a fresh accent of their own) that makes them sound really stuck-on. Having said this, though, with more ballsy playing the release samples do mostly work well, and are a good feature to have.

Vir2 tell me that Mojo 2 is subject to considerable ongoing development. A major update planned for summer 2019 should tighten up tuning still further, and entire articulations are being re-recorded to improve consistency. There should also be a better-sounding legato, and options to disable individual articulations (to lower the potential RAM footprint) or load single-articulation instruments with an additional playback speed parameter (so you could choose the exact length of your stab, presumably). Control of 'real' vibrato rate is also on the cards, as well as an auto-divisi arrangement-type feature that several competitors already have.

There's a lot to like in Mojo 2, and it's going to prove a valuable asset to those working in many different fields of production and scoring. A distinct lack of gimmicky pre-programmed licks and (currently) no auto-voicing features means you need to have your arranging chops up together for more elaborate work. The underlying quality of samples and programming can make for staggeringly good results, though, with atmosphere and attitude aplenty.

Not just sax and trumpet: an extensive survey of the horn section from the jazz era onwards, in multiple articulations.
Capable of very convincing, realistic results.
Notably playable and easy to use, with no fiddly programming schemes, but plenty of flexibility where it's useful.
Adapts unfussily to cover solo instrument, ensemble and section requirements.

A few inconsistencies and errors in instrument capture, tuning and programming in the current version.
Articulation key ranges differ between instruments and have to be reprogrammed for live playing of some unison combos.
Though individual instruments using the Full Mix mic perspective run lean enough, scoring an entire section using multi-mic mixing and ensemble features requires lots of memory and CPU.

A bold, characterful, wide-ranging library that should fully satisfy many users' need for horn.