True Keys Pianos provides three superior,
deep-sampled, highly playable pianos in
one package. Pristinely recorded from three
mic positions, the Steinway, Bechstein and
Fazioli concert grands collectively cover
a wide tonal range and can be used for
virtually any musical style.
I used to dislike playing sampled pianos almost as much as I hate going to the dentist, but in recent years something has changed. Sample companies have begun throwing resources into capturing all the dynamic variations and pedal inflections of some top-notch 88-note concert grands, and (as with orchestral samples) the gap between the real thing and the sampled facsimiles has narrowed to a point where very few people can tell the difference. Perhaps we've reached a point where even nit-picking sceptics like myself must accept that JS Bach's Well-Tempered Clavier has been superseded by the Well-Sampled Pianoforte?

Anyway, the latest high-end piano collection to come to the attention of your Bad-Tempered Reviewer is US company VI Labs' True Keys Pianos, currently winning accolades on both sides of the Atlantic. The company's details are shrouded in mystery, but this much is known: back in 2009, one of its principals, a demanding power user of sampled instruments, developed a profound distaste for the sampled pianos then on the market and decided, in time-honoured fashion, that he could create a better one himself. The ensuing collaboration with person or persons unknown resulted in the creation of VI Labs and the True Keys piano collection.

No half-decent sample library gets knocked up overnight, and since VI Labs' aim was to raise the technical standard of virtual pianos, it took nearly four years to develop the final product. Three grand pianos were chromatically recorded at up to 15 dynamic levels, from three mic positions, in normal, sustain pedal, soft pedal and half-pedalled playing modes (more of which later). Release samples and round-robin note repetitions bumped the audio file count up to nearly 50,000, then an elaborate scripting language had to be devised to handle the numerous performance details. In short, it was a programmer's nightmare. An unnamed VI Labs spokesman confided in me, "I would be lying if I said our patience wasn't tested a few times along the way."

In order to create a product that would maintain a high level of performance while conserving system resources, VI Labs ended up collaborating with the French company UVI, makers of UVI Workstation

Micro Lite
Each of the three True Keys Pianos was simultaneously recorded from three microphone positions. The 'Close' position uses the traditional 'mics under the lid' approach, 'Player' is recorded from the pianist's perspective and sounds more open, with a wider stereo image, while 'Side' (my favourite of the three) has the fullest, most natural sound. The three positions have their own volume setting, are phase-coherent, and sound great when used in combination. To reduce CPU and RAM strain, VI Labs have also supplied 'Mix' samples for each piano, which combine the three mikings into a single stereo mix with its own designated volume fader. There's also a complete set of 'lite' patches, which you can use for composing, reserving the more system-intensive full patches for your final recording pass or mixdown.
and the MOTU Mach Five sound engine. After much tweaking and testing, a version of UVI Workstation optimised for True Keys Pianos was built, and the piano package was ready for lift-off. The three grand pianos in True Keys are an American Steinway D, a Bechstein semi-concert grand and a Fazioli F308, with a collective price tag that would make Elton John blush. Standing 10 feet two inches in its cotton socks, the Italian-made, top-of-the-range Fazioli grand is designed for the modern, large-capacity concert hall and has its tone enriched and amplified by the increased string-length in the bass section. The sampling sessions took place in unidentified studios across the United States: in an unguarded moment, my informant let slip that the Bechstein was actually recorded in a castle (a lapse for which he was later executed by his superiors) to give it "a little more vibe". However, since the German instrument shares more or less the same dry room acoustic as the other pianos, we can assume that the building in question has had some acoustic treatment done to its stone walls.

Adventures In America
I began my test with the American Steinway. The 'American' part refers to the fact that Steinway pianos are manufactured in New York (where the company was founded in 1853) and Hamburg, home 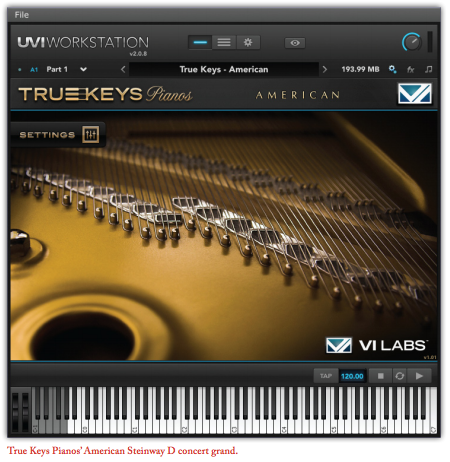 of Steinway & Sons' European operation. Being a rock & roll oaf, I've never paid much attention to the difference in sound between the New York and Hamburg Steinway, but I'm beginning to appreciate that the slightly softer hammers used on the American models make a distinctive contribution to their overall sound.

This American Steinway offers a combination of sweetness and clarity that will suit any player looking for lyricism in a sampled piano. Although its tone is rich, warm and inviting, the distinct presence of the attack across the range means that the rhythmic outline of played lines never gets blurred, regardless of how many other notes are being simultaneously pedalled or held down. The piano also benefits from a good, long, 'singing' sustain. Those factors make this instrument a good bet for jazzy and sensitive improvisations (where the right hand can spin lines over sustained left-hand chords), and for comp'ing behind a vocalist or instrumental soloist.

It's not all sweetness and light, though; crank up the velocity and the Steinway thunders, particularly in its low bass register. To use it in a rock track, you may want to reduce the 'Dynamics' setting to round 50 percent, in order to readily access the piano's high-volume range (less strenuous than frantically bashing the keyboard, I find). Brightening the tone a little also helps: you can do that either with the tone control on the GUI front panel, or via the elaborate parametric EQ found under 'Preset' on the multi page.


European Tour
Hopping back across the Atlantic, we find a German-made piano whose brand has been endorsed by the likes of Franz Liszt (the Richard Clayderman of his day) and the 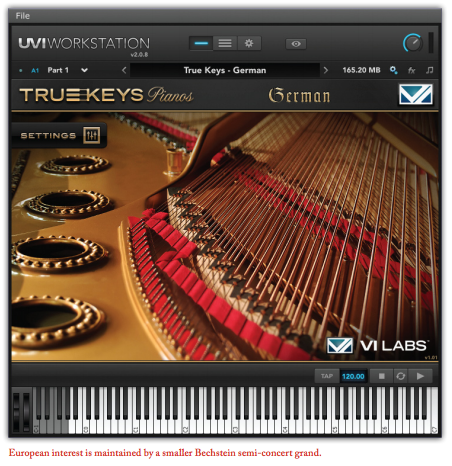 much-missed Queen Victoria, who presaged the tastes of her 20th-century namesake Mrs Beckham by ordering a fancy gilded model for Buckingham Palace. The piano is a Bechstein, and I'm guessing the sampled specimen here is a C234. At just under eight feet long, it's the smallest piano in the collection, but it generates a fair old racket nonetheless.

First impressions suggest that the Bechstein's sound is in the same ballpark as the New York Steinway, but closer listening reveals significant differences. Although its tone is somewhat more veiled than the American grand at quiet dynamics, the German piano's attack has real bite when played louder, making this the most effective of the three pianos for belting out repeated, high-end eighth-note rock & roll triads. Its loudest fff dynamic also packs more low-mid energy than the American grand, giving its loud bass notes a stentorian punch.

There's absolutely no danger of mistaking the Italian Fazioli grand for either of the other instruments: this piano is in a timbral class of its own, and I can see why some consider it the best in the world. (Check out veteran piano technician George Kolasis' fascinating views on the topic at www.georgekolasis.com.) The Fazioli shares something of the Steinway's warmth at quiet dynamics, but when you increase your strength of touch, it opens out into a magnificently clear, transparent timbre, with a long sustain, a consistently precise, brilliant-sounding attack right across its range and a huge bottom end fit to herald the Day of Judgement. If you need a big, stately sound, this is the True Keys piano to go for. Its bright, pinging attack might be a little overbearing for ballads and delicate improvs, but you'll not find it wanting in power.

The 'sympathetic resonance' of notes played with the sustain pedal pressed down is reproduced in True Keys Pianos by a set of harmonically-related resonance samples which can be turned up and down in volume. I wish their maximum volume had been set even louder, as they 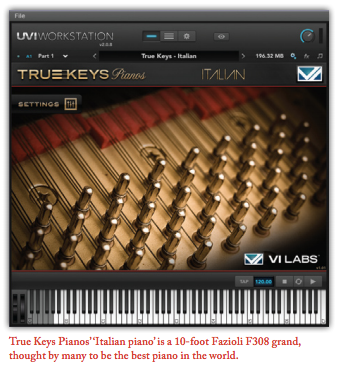 have a glorious stereo 'wash' effect. Re-pedalling, a subtle technique whereby the sustain pedal is pressed shortly after releasing the keys, in order to 'catch' and sustain the note die-away, is supported, as is the equally subtle half-pedalling style: this allows you to use a MIDI continuous controller to vary the amount of pedal sustain by degrees.

Two further pedal effects are likely to be of more general use: a full set of soft-pedal una corda samples impart a gentle, hushed tone, particularly effective on the Fazioli. The library also replicates the function of the mysterious sostenuto pedal found on concert grands: pressing this pedal while holding down some keys applies the sustain pedal effect to those keys only, allowing you to play non-pedalled notes over a sustain-pedalled chord. This control defaults to MIDI CC66, but you can re-assign it to the mod wheel if you're running short of footpedals.

One of True Keys Piano's most persuasive gimmicks is that it doesn't actually have any: no physical modelling or synthesis is used. Everything you hear is based on samples. Saying that this makes the pianos more 'real' may sound like a contradiction in terms, but it's comforting to know that your performances are triggering sounds made by a real-life person on an acoustic instrument, down to the last detail of a quietly reiterated una corda note or a half-pressed sustain pedal.

If you'd told me 10 years ago that I'd enjoy reviewing a sampled piano, I wouldn't have believed you, but the fact is that while auditioning these three fine instruments I frequently found myself falling into that magical state of mind (or is it non-mind?) where one begins to write music, and that's probably the biggest compliment anyone could pay a sample library. Formerly, I'd have flatly refused to consider using a sampled piano on a recording, but having a library like True Keys Pianos at my disposal has moderated my views. Congratulations to the VI Labs team (whoever they are) for creating such a musically responsive and playable piano collection.