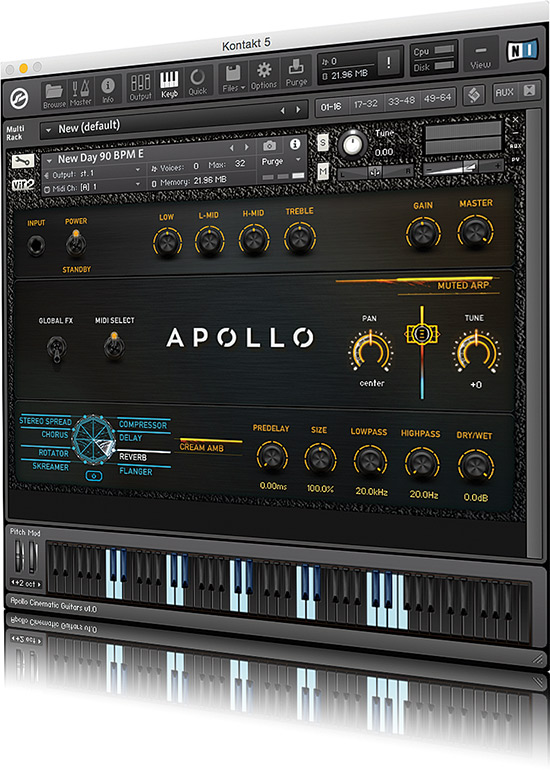 Even those who can’t play guitar need access to great guitar textures.
Hollin Jones gets involved with Apollo Cinematic Guitars...

• Experimental as well as
conventional sounds

Guitars are capable of much more creative sound design than some people realise, and they feature heavily in many soundtracks, whether in raw or heavily processed forms.

If you’re not a guitarist or don’t have lots of pedals and amps, conventional sample-based guitar instruments can be a bit limiting for sound design work.

Apollo Cinematic Guitars is designed for this kind of task. With 22GB of content from industry-leading composers and producers, it runs in the free Kontakt Player or the full version of Kontakt – so can be used in standalone or plug-in mode.

The collection is split into five categories, each taking a different approach to sound generation and shaping. The Ambient Designer category is pretty experimental, creating special atmospheric effects.

All the sounds emanate from a guitar, but they include things such as slides, white noise and amp buzz. Like most other patches in the instrument, these are mapped across the keyboard and their positions shown using coloured keys. With the six sound slots, you can mix, pan and blend sounds to create your own atmospheres. There’s also an effects section, plus a mixer for setting the level of individual notes in a patch.

The Pads section enables you to load and mix two pads, each with a unique sound. There are configurable effects, including stereo, chorus, rotator, screamer, compressor, delay, reverb and flanger. Some of these have types that can be selected within the effect. There’s an amp-style section, too, featuring knobs for controlling tone, drive, bass, brightness and clean signal, as well as an EQ section.

The Swells section is a large collection of patches, with things such as strums of high and low versions of major and minor chords for each sound. You can click on a button to see how each patch has been mapped across the keys, and there’s an LFO to modulate the sound, with variable controls to introduce a specific amount of movement.

Moving on, you come to the Phrase Builder section, which is particularly interesting as it has been put together in conjunction with professional guitarists working in television composition.

Many of the most effective scores are also the simplest, but it’s vital to get the phrasing and pacing of the parts right. Here, you can skip to that stage by using the pre-created phrases supplied and mapped across the keys. These are fairly simple but effective, and easy to incorporate into wider compositions or use on their own for more dramatic effect. The controls are simple, too: tuning, panning, effects and EQ sections are available. It’s a quick way to put together some melodic sequences for any composition.

Last but not least is a collection of Instrument patches that are more conventional sampled guitars and can be played using MIDI. These cover acoustic and electric guitar, bass and sitar sounds, supplied with dry and effected versions. There are up to three velocity layers, five round robins and simple expression controls.

Simpler passages work most effectively, since the actions of playing strings and keys are fundamentally different. If you want strummed sounds, those are available in other sections of the instrument. The sampled guitars in the Instruments section sound great, and will be useful if you’re inexperienced or not a guitar player at all, but need authentic-sounding guitars in your score.

The focus of Apollo Cinematic Guitars is very much on the ‘cinematic’. It can do simple guitar reproduction, but its true strengths lie in the more experimental and atmospheric side of things.

It’s handy, also, that you get a number of different ways of working with sounds, rather than just a long list of patches. Each mode works differently, yet the consistency of the interface means it all stays familiar.

These range from conventional pad-style sounds and plucked strings to more unusual swells and the kinds of sonics you can generate with the Ambient Designer section. The controls are easy to follow, the presets very usable and the potential for creating unique soundscapes is vast. This is a great tool for anyone working with scores who wants to bring a new level of atmosphere to their productions.

+ Get ethereal guitar tones without being a player

- Perhaps not useful if you're already a skilled guitarist

- Better for scoring than regular music productionA very solid collection of guitars, expertly tuned for use in cinematic scoring.
8/10