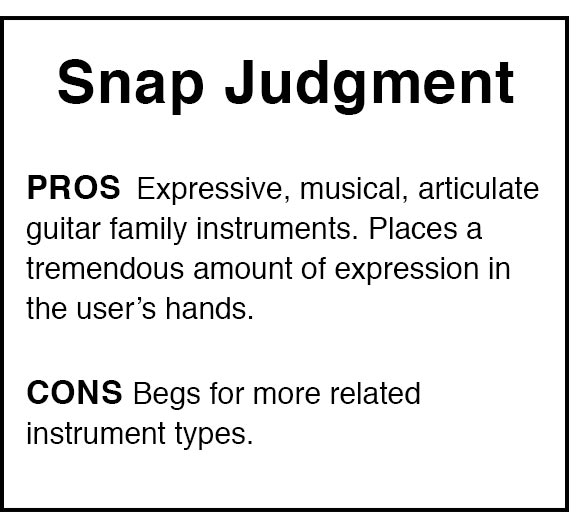 With all of the detail that goes into a fine acoustic piano sample set, it’s a wonder that anyone would attempt the same task for acoustic guitars. The range of playing techniques and timbres for guitar arguably outstrip those of the piano, whose strings are set in motion more mechanically than the guitar’s direct, intimate, and chaotic action of fingers on strings. Now, Vir2 has released Acou6tics. Their attention to detail and seemingly deep understanding of what constitutes a well-played guitar has led to perhaps the most flexible and articulate acoustic guitar-oriented sound set I’ve heard to date.

Overview
Native Instruments Kontakt Player 5 hosts the Acou6tics library, which distributes its 13GB of samples among 12-string, nylon-string, ukulele, mandolin, guitalele, and steel-string guitar (with finger and flat-pick variations), as well as General MIDI versions for each instrument. The documentation recommends an Intel Core Duo 2.0 GHz and 2GB of RAM at minimum. The depth of scripting and the sample size involved suggests that you might want to beef up your RAM, and maybe, your processor—as using Acou6tics steel-string guitar and mandolin in the context of a five-piece bluegrass band arrangement pushed the processor of my 2.8Ghz eight-core Mac Pro with 14GB RAM, sending me scurrying to my Kontakt and DAW buffer settings. Nevertheless, I was able to get everything running smoothly with a few tweaks.

Source instruments comprising the library derive from professional—if not vintage instruments. The centerpiece of the library is the “Western Guitar,” a steel-string instrument whose source, a Gibson Songwriter Deluxe, represents Gibson’s incursion into the Martin marketplace. With a resonant, woody, and clear high end, the instrument is more versatile than the more brassy Gibson J-200 or Hummingbird. The mandolin samples derive from a Fender F-hole mandolin. Although I haven’t seen many of these in bluegrass and folk circles, the sampling is excellent, and is leagues above the sound of the cheap round-hole mandolins that typically find their way from someone’s flea market to sampling sessions; this is clearly a professional instrument.

Articulations
All of the instruments are serious pieces of work, with meticulous, multi-dimensional sampling. Not only is the velocity layering smooth and musical, but Vir2 has captured up-and down-picking strokes, in addition to body-cavity resonance, instrument noise, slides, hammer-ons and pull-offs, and significantly, the ability to modulate the distance between neck- and bridge-position picking, which goes a very long way toward pulling off a convincing solo acoustic guitar performance.

Acou6tics hands over plenty of tools to adapt to practically any type of performance and any mix. In general, playing solo lines can be utterly convincing, thanks in part to very fluid sounding (and adjustable) legato settings. A group of logically arranged key-switches gracefully avoids confusion by keeping assignments as consistent as possible between patches. The very bottom range of the keyboard switches between banks of preset keyboard layouts. Banks map Acousti6cs’ generous assortment of strums (including full and partial up-and-down strokes), slaps, harmonics, and other artifacts to the upper ranges of the keyboard, while a handful of keys above the bank selectors shift between such articulations as palm mutes, hammers, pull-offs, and slides. Kudos to Vir2’s use of momentary keys to enable slides on those last three; typical velocity-switched slides are harder to control, and in general, should not be tied to dynamics. Notes can include string-release noises, muting sounds, the pitch swoop of a string released while the left hand is sliding, and of course, string squeaks in scalable amounts. Depending on the patch, the upper reaches of the MIDI note range deliver up-and-down strums of different lengths on adjacent keys, along with body taps, muted up-and-down strum triggers, harmonics, and string squeaks.

Should you want to customize your patches, tabs at the bottom provide plenty of tweakage. The first tab opens Mics and FX, letting you set up virtual microphones with up to half a dozen effects, including EQ, reverb, chorus, delay and the like, plus virtual distance and room settings. Another tab affords separate access to a virtual piezo pickup DI with the same set of effects and their parameters (See Figure 1).

Acou6tics does a great job of translating keyboard voicings—even fairly sophisticated chords—into more guitaristic chord positions, but if your bent is Allan Holdsworth or Ted Greene, feel free to open the Chords tab, capture your own chord voicings, save them, and call them up again for later use. An embarrassingly basic, folkie G chord doesn’t lay out all that easily on a keyboard. Neither does the task of replicating a convincing and consistent up-and down-strum, but it’s child’s play to Acou6tics: All I needed to do was hold down the root, third, and fifth and play the up-and-down Strum keys, and Acou6tics played those, plus the open second, third, and fourth strings, and the first string, fretted at the third fret. Speaking of folkies, you can set up a virtual capo, which voices all chords and string positions appropriately.

The next tab lets you assign your own key-switches to any of the five banks in any combination you’d like. It’s a simple amenity, but it encourages customization when you can access any of the banks by MIDI in the editing mode with the bottom key switches as in the performance mode. The windows change to reflect the assignments in each bank, and a list button displays all of the assignments used in each bank and their associated MIDI notes. Finally, the Playback tab returns you to the main window, which is graced by half a dozen knobs reflecting the articulations you’ve made in your bank assignments. A small button reveals a second set of six knobs. Assigning any parameter took no more than a right-click and a twist of a knob on my Novation SL61 MIDI controller.

Sounds
It’s refreshing to find a sampled 12-string guitar whose sample map corresponds to the real thing, with the top two string pairs in unison and the lower four in octaves—as opposed to two guitars an octave apart. Of course, because it’s a guitar, you can play the same notes on multiple strings, but Acous6tics understands that, and intelligently remaps your input, so lower chords may start as first-position barre chords, while playing higher on the keyboard yields higher guitar voicings on the virtual fingerboard. In short, you retain that rich mixture of octaves and unison tones—just like a real 12-string.

The sweet-sounding nylon-string guitar was another delight with its ability to shift from picking with the flesh of the finger to the nail. Don’t overlook the General MIDI folder, which retains all of the realistic artifacts of the other instruments, minus automatic voicings and Strum keys.

Conclusions
Vir2 Acou6tics amounts to the most realistic sampled acoustic guitar family and mandolin instruments I’ve heard to date. The sounds drip with acoustic juice, and played with care, are utterly convincing, even in exposed solos. If I have any complaints, it is that they’re the victims of their own success—in that I was hoping for a wider range of guitars, and maybe even a couple of thoroughly sampled banjos with this thoughtful attention to musicality and detail. Still, the choices are excellent, delivering a ton of versatility and realism. Perhaps Vir2 can be persuaded toward an upgrade path or a sequel. As it is, Acou6tics receives our Key Buy award.