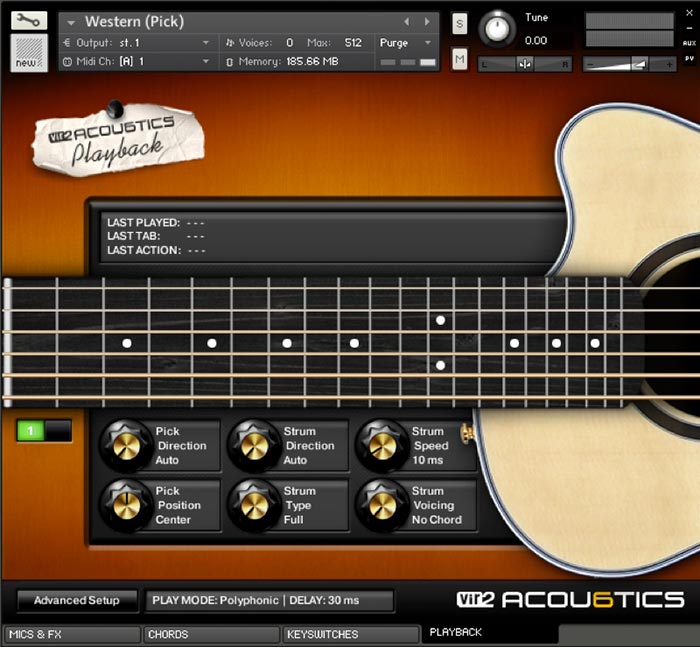 Having done electric guitars, Vir2 turn their attention to acoustics, but the inexplicable '6' remains intact...
When it comes to the recording of music, sample-library companies and their increasingly sophisticated virtual instruments are set on world domination. Soon, only keyboard players will be left (OK, maybe singers as well, but they won't necessarily have to be very good ones) as the rest of the band or orchestra are recreated in virtual form. Vir2 are part of the plot and having targeted the electric guitar player with Electri6ity back in 2010, they now have acoustic guitar players in their sights. While I shouldn't be hypocritical (I use BFD and Superior Drummer for almost all my acoustic drum needs), as a guitar player I was left pretty much open-mouthed by what a keyboard-playing friend could coax out of Electri6ity. So does the arrival of Acou6tics mean I should be worried that, in the studio at least, my guitar-playing skills are now completely redundant? Let's find out...

Nick Magnus gave Electri6ity a big thumbs up back in the September 2010 issue of SOS. Nick's two reservations were simply that the library could be quite resource hungry and that learning your way around the various keyswitches did take some time. If you have not heard what Electri6ity can do, though, do check out the demos on the Vir2 web site; in the right hands, it is scarily good. Vir2 are now back with the acoustic equivalent. In Acou6tics, the six- and 12-string steel, nylon strung, ukulele, mandolin and guitalele all get the mega-sampling treatment; there is over 12GB of sample data, between 4,000 and 8,000 samples per instrument, an impressive range of performance articulations, finger-picked and plectrum options where appropriate, and stereo miking plus piezo DI options.

PROS
CONSSUMMARY
Vir2's Acou6tics comes as close as I've yet heard to putting acoustic guitar players out of work. If you take the time to learn how the performance interface works you can create utterly convincing performances which sound fabulous.
Out Of The Case

Large download aside, installation and authorization proved painless and the structure of the library within Kontakt (either the free Player version or the full version) is simple. You get three versions of each instrument: a 'full' version that contains all the articulation and performance options and uses the intelligent voicing built into the engine; a 'General MIDI' version that includes various articulations but where the voicing of notes/chords simply reflects where you play on your piano keyboard; and a 'string by MIDI channel' version where each string responds to a different MIDI channel and which would, I suspect, suit some MIDI guitar controllers. Of the six acoustic instruments in Acou6tics, the steel-strung, nylon-strung, ukulele and guitalele are supplied in two versions each (all are finger picked but you also get either plectrum or a fingernail-picked version of each) so there are actually 10 presets within each of the three categories mentioned above. Given the number of articulations available in each, these are pretty hefty but there are, of course, plenty of ways to lighten the load while tracking (for example, just using one mic channel, adjusting the DFD buffer) even if you then give Acou6tics full reign when you come to render your final mix. All the instruments were recorded using a stereo mic configuration in a fairly dry space and with an additional piezo channel. Articulations — which are available on all strings and all frets — include sustained notes with up/down and finger/thumb/pick/nail pick, muted, legato (hammer-on/pull-off), slides (up and down by one and two frets plus slides into notes), release noises, chucka-chuckas (muted strummed chords), harmonics and various effects (pick noises, body knocks, slaps, for example). In terms of the sampling itself, this is detailed stuff. 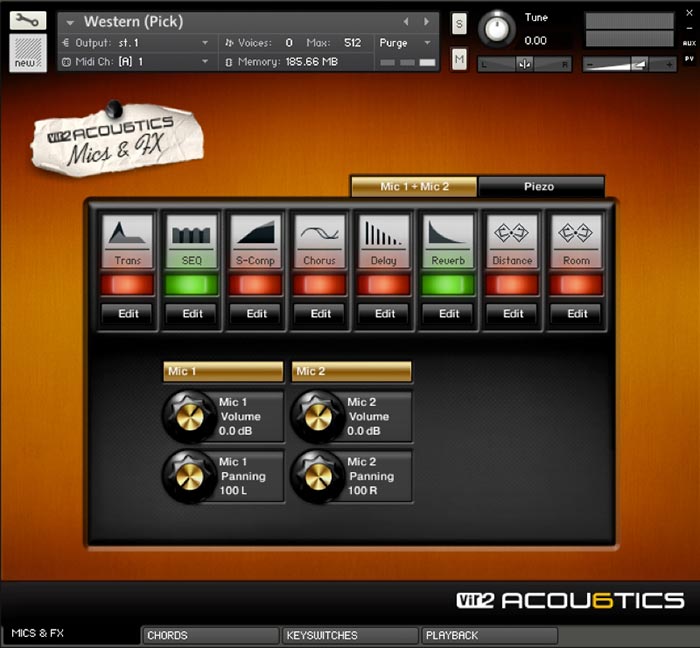 Acou6tics includes flexible microphone and effects options to tailor the sound of each instrument.
As with a top-notch orchestral sample library, all these keyswitched performance articulations require some learning to use effectively. However, there is obviously some very clever scripting going on inside the Acou6tics/Kontakt engine because, in use, certain performance elements are applied in an automatic and intelligent fashion. There are numerous facets to this but a couple of examples of the Acou6tics approach to strummed chords will illustrate the point. Acou6tics features an advanced chord-detection algorithm and, when multiple notes are received simultaneously (and you can configure the time frame for this), they are automatically played as a single strum. And if you play the chord a number of times, Acou6tics will, by default, alternate between downward and upward strums. If you don't want to get involved with lots of keyswitches and trigger keys for finer strumming control, Acou6tics will deliver a perfectly reasonable strummed performance from basic chords played on your keyboard.

The second element that helps here is the database of some 25,000 chord shapes. Whatever voicing you play on your piano keyboard, you will get an appropriate guitar voicing back from the library. Rather wonderfully, when you play the same chord further up the piano keyboard, Acou6tics will choose a voicing/fingering that mimics that further up the guitar neck. What's more, the default settings for all these types of detailed features can be adjusted or overridden though various controls and settings options within the custom Kontakt front-end. There are all sorts of other elements to the overall sound that help provide a convincing performance. For example, the engine will add elements of pick, fret and finger noise to the performance. It also can simulate the slightly 'duff' chords that occur at chord transitions when a guitar player moves between two chord shapes. The physical resonance of the instrument is also emulated and you can, of course, blend in the two mics, the piezo channel and some room ambience if required. Again, all these elements can be dialed in or out to taste. There is also a very efficient system for creating double-tracked performances; this works brilliantly and ensures identical samples never appear in both 'left' and 'right' guitars at the same time. 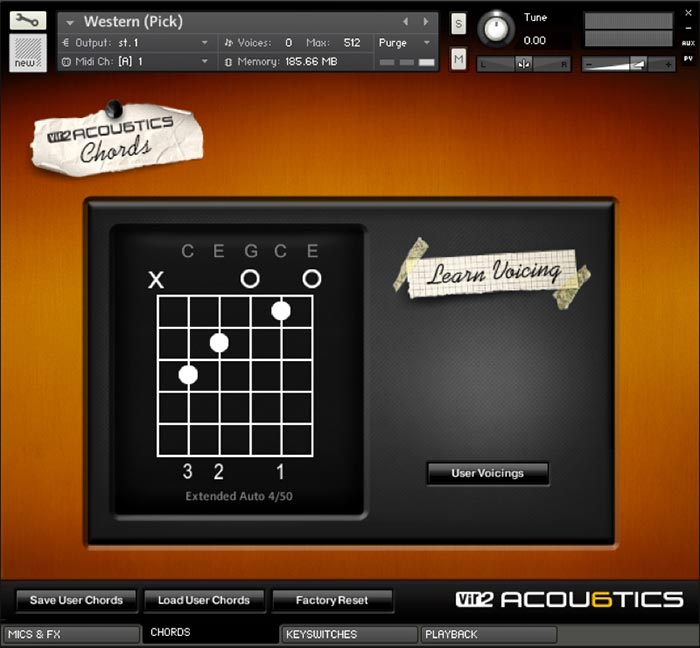 There are nearly 25,000 chord shapes stored in the chord database. Users can select those they would like Acou6tics to use if they want to restrict the choices made by the library.
While the Acou6tics engine takes some of the heavy lifting out of using the various performance options, if you want to fully exploit the library, the combination of banks, keyswitches and trigger keys requires some exploration. By default, each instrument offers six banks. A bank can be thought of as a keyboard and sample configuration where the layout of the various keyswitches (that is, keys that control the performance and articulations rather than the actual notes or chords played) and 'play range' (the keys where you can trigger actual notes or chords) is defined. So, for example, Bank 1 provides a polyphonic mode with the maximum number of MIDI keys allocated to the play range (and hence fewer keys allocated to keyswitches or other performance options) while Bank 3 also provides a polyphonic mode but has a reduced play range to make room for keys to trigger picking within chords and sliding. Switching between these different banks is done via keyswitches laid out on notes C0 to F0. Within a particular bank, other keyswitch zones provide access to performance options so, for example, G0 provides a normal sustained note while A#0 can provide a slide into a note.

Other keyswitches, however, are described as trigger keys, and there are a good number of these. For example, a series of strum triggers provide options for full chords (all six strings) and various smaller voicings (for example, upper strings or lower strings only) and, in each case, downstrokes and upstrokes are provided. Whatever chord is played within the play range keys you can, therefore, create a strumming pattern based upon just playing these trigger keys. Picking is just as well served; the picking trigger keys simply allow you to simulate picking individual strings of any chord voiced within the play range. This works very well and, as elsewhere, you can dip into the settings to adjust exactly has this behavior operates. It's all very flexible and very powerful. One final technical comment; with all these options for keyswitches (and the ability to create your own custom keyswitch layouts if you wish), you really don't want to try and use Acou6tics with a 25-key MIDI controller keyboard; even with my 88-note keyboard I was occasionally reaching for the octave transpose button. If you want to edit the behavior of Acou6tics then there are almost endless options and you can even define your own keyswitch layouts.
In exploring the various performance options, I focused my own experimentation on the steel-strung and nylon-strung guitars as these would be the instruments I would probably use most often. Legato playing is relatively straightforward and the only real challenge here is finding your way around the various performance articulations to you can add the appropriate slides, mutes and vibrato to create something believable. For slower melodic lines, this is not such a challenge, but if you are looking to play faster passages, then a little more practice is required. The same is true for strumming or picking chords; at slower tempos it is actually very easy, but if you want to get into something a bit more energetic, even with the impressive AI features, there is some keyboard practice required. Fortunately, in a sequencing context (as opposed to playing Acou6tics live), you can always build things up in multiple passes and via some MIDI editing.

A very pleasant surprise is how well these keyboard-based playing techniques then translated to the other instruments in the Acou6tics collection. They all sound great but, because the performance options are generally very consistent between the instruments, once I'd got to grips with picking or strumming on the steel- and nylon-strung guitars, I could bring those same techniques to the mandolin and ukulele. I don't own a mandolin, so Acou6tics plugs that gap. However, I do own a ukulele. Frankly, for the odd occasion I need that instrument, the sound I can now get from Acou6tics, given a little practice, leaves my own uke dead in the water. Indeed, for basic playing techniques —which don't take that long to get to grips with — I think this statement applies to all the Acou6tics instruments. They sound fabulous and, just as with the best of the virtual drummer instruments now available, you would have to try very hard in your average project studio to match the fidelity produced by Acou6tics once you had mastered the performance side of the instrument.

So will Acou6tics have me selling my modest acoustic guitar collection? Well, maybe not quite yet but, providing you put in the effort to learn the interface so you can squeeze the best out of the performance options, Acou6tics is capable of some breathtaking results. This library/virtual instrument is cheaper than even a half-decent acoustic guitar, let alone the multiple acoustic instruments included and the sits required to record them. In the right hands, Acou6tics could do for guitar players what BFD3 or Superior Drummer 2 has done for drummers — that is, for some music producers, make them superfluous. Whether you think that's a good thing or not is another matter but, whatever your take on virtual versus real, Acou6tics is hugely impressive and I'm sure composers and music producers of all genres will buy it by the bucketload. Right, I'm off to sit in front of my keyboard and practice my (virtual) guitar playing...